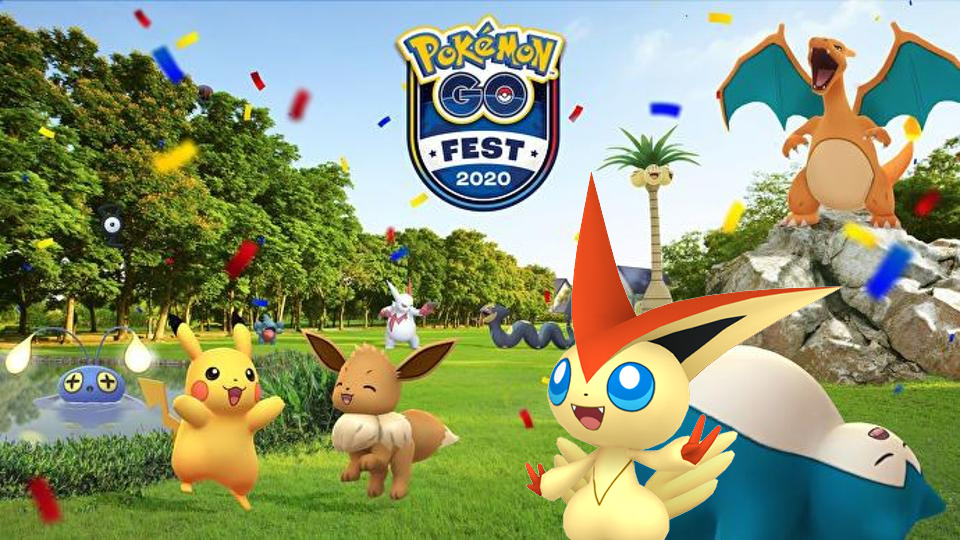 It’s officially July, which means it’s GO Fest Month! In addition to the weekend itself, there are three weeks of tasks in the lead up which will result in the weekend being even better. It seems like it’ll be similar to the Throwback Challenges from May but datamined information seems to suggest that the main research needed to be done will only be three sets (but we can’t rule out each task being 15).

I’m super excited and I’ve already got my ticket for the weekend (purchasable through the in-game store for £14.99), but read on for more about the events in general!

This month’s Research Breakthrough encounter is one I’ve been hoping for a shiny of for a while now – Larvitar! Larvitar evolves into the Godzilla-inspired Tyranitar and is a very strong Mon in general. Although I’d prefer Legendary Pokémon for the rewards I’ve got to say that Pseudo-Legendaries are pretty good substitutions.

Each week there are targets to unlock specific Pokémon to appear during Pokémon GO Fest 2020. For Week 1 this will be:

Following completion of the sets of tasks you can do an extra ‘Elite Skill Challenge’, but the rewards for this are stated as ‘bragging rights’.

This week also marks the fourth anniversary of Pokémon GO, and we’ll have additional benefits from that! Ducklett is a new Mon appearing, along with Flying Pikachu (which looks to be Pikachu flying with balloons, shiny also available) and a new shiny – Pidove.

Furthermore, Pokémon wearing party hats will be appearing in the wild, in raids and hatching from eggs too!

And the last benefit to this week is great for those who are new to the game – Jump-Start Special Research will be available for any trainers who missed it last year, one of the reward encounters being shiny Eevee!

The weekend of 3rd July to 6th July has another special event too – Ho-Oh raids! So if, like me, you don’t have a shiny Ho-Oh yet then now’s your chance to try!

From July 7th we’ll have Kyurem replacing Zekrom in the five-star raids, being the last of the Unova Legendary Dragons. For the three weeks following it’ll be featured in the raid hours Wednesday 6-7pm local times.

For this week if you finish the three sets of tasks you can earn an encounter with Hitmonlee, an encounter with Absol, a Super Rocket Radar, and more. Again, more Pokémon will potentially be unlocked for the weekend itself such as:

Again, there will be an Elite Battle Challenge but the only advertised benefit is bragging rights again, and on the Saturday (July 12 from 11:00 a.m. to 2:00 p.m. local time) will be a Battle-themed Event but we haven’t had any more information on that just yet.

This week will ask you to take a moment to ‘appreciate your pals’, including Buddy Pokémon and other trainers. It seems to involve a lot of sending gifts and the Timed Research will be available until July 22—just a few days before the Pokémon GO Fest 2020 weekend starts.

If the following numbers of Trainers from the same team complete their Timed Research this week, the corresponding Pokémon will appear during Pokémon GO Fest 2020 (I’m so happy to be Team Mystic for this one):

The Timed Research will be accompanied by an event that celebrates summer! Summer Style Pikachu will be appearing in the wild and hatching from Eggs, and Petilil, the Bulb Pokémon, will be making its Pokémon GO debut. We also get a new shiny this week – Bellsprout.

The big weekend will be on the 25th and 26th of July, and one ticket guarantees participation for both days. The first Pokémon Presents revealed that the Mythical we’ll be getting will be Victini – which I’m super excited for!

Niantic are keeping the events for the second day under wraps as a surprise, but the first day will involve access to a special research story and five rotating habitats—themed around fire, water, grass, battle, and friendship—will feature special Pokémon that go along with that habitat’s theme. These habitats will rotate every hour, so each habitat will be featured twice during Day 1.

Trainers will be able to work together in the GO Fest-exclusive Global Challenge Arena. In the Global Challenge Arena, Trainers will have a chance to join forces in order to complete a collaborative challenge each hour. If Trainers complete a challenge, they will earn a bonus for the remainder of the hour. Examples shown include sending enough gifts so that rare candies will be included in gifts sent after completion!

Promotional images have shown the likes of Gible, Unown and Seviper – the latter of which is a regional we’ll hopefully be able to catch for the first time in the UK! I’m hoping this also means we’ll get a good chance of getting a shiny Gible too – one of my most-wanted shinies!

This month’s Community Day will be Gastly, but as of yet we don’t have a date for it. I’m guessing it’ll either be on the 18th or 19th of July though, giving us a week before GO Fest.

Last, but not least, we have four new spotlight hours this month, being:

– Will you be playing Pokémon GO for these events? –
– Feel free to leave a comment or tweet @PlayReadRepeat! –

Luchia
A 26-year-old Digital Marketing graduate with a passion for way too many things in life.